Is it any wonder that the world is obsessed with Kaley Cuoco? She is funny, she is witty, and she is an absolute natural beauty. However, Kaley’s famous on-screen character Penny marries her co-star Johnny Galecki (Leonard).

We’re not saying that Johnny Galecki’s character Leonard, on Big Bang Theory never got to see his on-screen girlfriend (and eventually, his wife) wearing some classy outfits,

Cuoco’s first role was not as Penny on The Big Bang Theory. Although most fans are aware of that (and are also likely aware that she starred in 8 Simple Rules For Dating My Teenage Daughter) before she was ever cast in Big Bang,

Kaley Cuoco is a natural beauty. Yes, she does put in a lot of time at the gym and does attend lots of yoga classes, but there is no denying that she’s stunning no matter what she’s wearing.

Kaley Cuoco gave a pretty spirited performance when she appeared on Lip Sync Battle in 2016. Not only did the star perform a rather not-so-PG song by Ludacris, but she also brought her A-game when she performed Britney Spears’ provocative song, I’m a Slave 4 U.

We’re not entirely sure what magazine Kaley Cuoco was posing for, but it looks like this was a behind-the-scenes shot from a photoshoot.

Although Kaley Cuoco and Ryan Sweeting called in quits a few years ago in 2016 (and she remarried since then), their relationship was high-profile.

As we mentioned earlier, Kaley loves attending yoga classes, and the paparazzi love hanging around just waiting for an opportunity to snap a picture of The Big Bang Theory star

We wouldn’t blame Johnny for crying himself to sleep after photos of Kaley Cuoco, and the actor who plays Superman in the DC universe came to light.

We mentioned how Kaley Cuoco was asked to do a shoot for Maxim magazine; well, Maxim was not the only publication to want a Kaley Cuoco feature.

Kaley is often spotted by the paparazzi leaving the gym while wearing yoga pants, but something about this particular outfit makes her look even more attractive. She is wearing a matching sports bra with the same print yoga pants. She posed for a Goldsheep photoshoot, and we don’t know about Johnny Galecki, but seeing her in this photo is enough to make us lose sleep.

When Kaley was asked to do a photoshoot for Cosmo, we’re sure she was ecstatic. Was her boyfriend at the time Ryan Sweeting thrilled? We’d guess not so much.

This one’s gotta hurt. We know that the two Big Bang starred date in real life when they were still filming for the show, so we can’t imagine what it must have been like on set when they broke up.

6. Posing For The Camera

It shows that the camera loves Kaley Cuoco. We don’t assume the photographer taking her photo ever has to do much work since she looks nearly perfect in every photo we see of her, whether it is a magazine cover or a behind-the-scenes shot.

Is it just us, or is Kaley Cuoco giving off some real Marilyn Monroe vibes in the photo above? Is she trying to kill Johnny Galecki? We don’t know, but this photo is simply mesmerizing.

We’re guessing that Leonard would not like this photo one bit. We know that Penny and Sheldon may not have been the best of friends at the beginning of the series but by the end,

We don’t know if Kaley was finishing up the gym or leaving a hot yoga class, but wherever she was coming from, one thing is for sure: she pulled quite a sweat.

2. With Her Real Husband

We assume Johnny Galecki tries to stay as far away as possible of photos of his on-screen wife with her real-life husband, 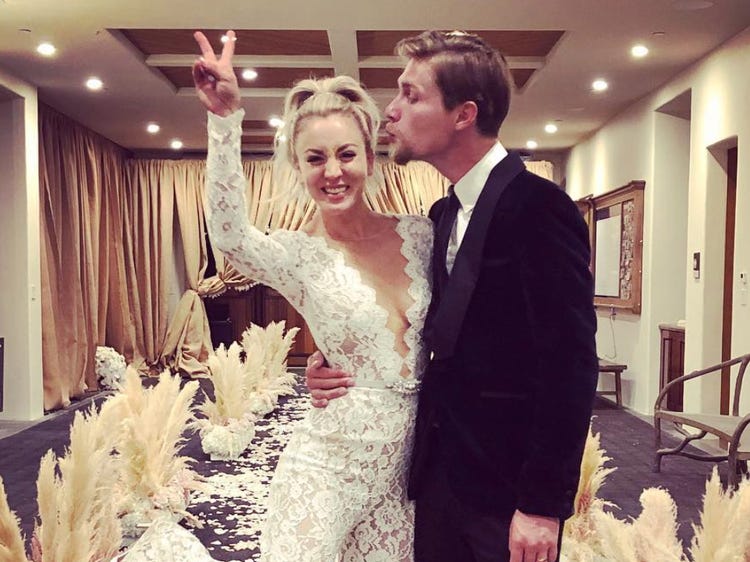 Penny has never looked so happy. Although Penny and Leonard get hitched in season 9 of The Big Bang Theory, we can safely say that she did not look as comfortable as in the photo above with Karl Cook.